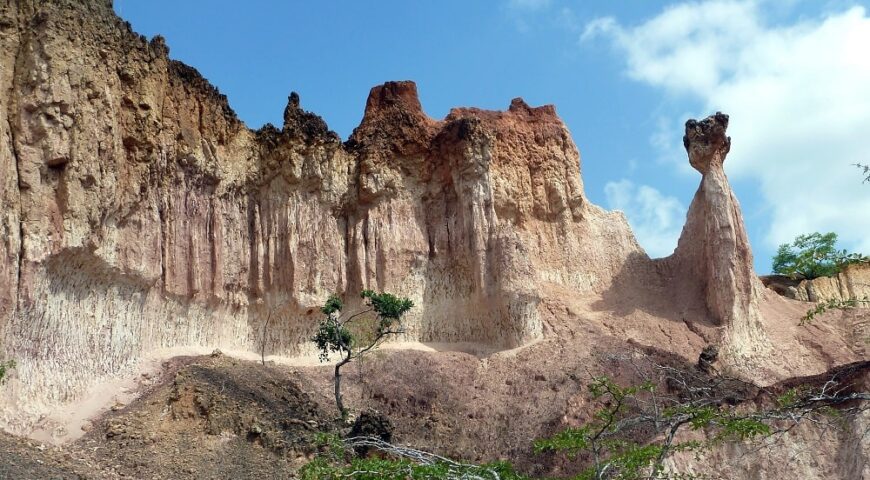 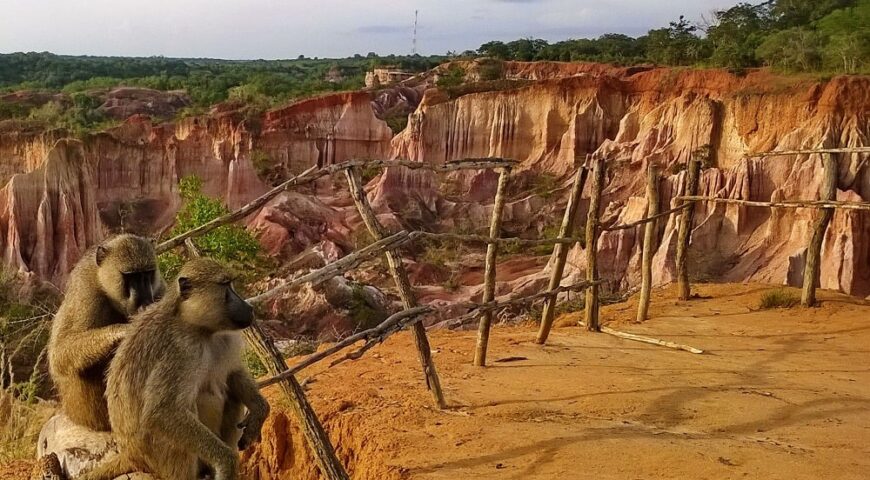 ‘Nyari’ in Giriama language means ‘the place broken by itself’ is a word popularly used to describe Marafa Depression or the Hell’s Kitchen. The naturally carved stone columns and changing colors of this unusual sandstone mini-canyon, for a long time, has been a spot of many sacred rituals since ancient times. These strange and surreal natural shapes of Marafa depression, was once a great sandstone ridge that was worn by wind, rain and even floods into a series of jagged gorges. The layer-cake colors of the sandstone reveal multiple of colors ranging from white to pink to orange and even deep crimsons, making the gorge particularly striking at sundown especially when tones of the ribbed sandstone gullies are highlighted and mirrored by those of the setting sun.

A tale is told of how, the now magnificent Marafa depression came into existence. Some believed that it was due to divine wrath. A long time ago, there was a rich and extravagant family that lived where Marafa Depression stands. The family constantly indulged in bathing in valuable milk from their cows. God was furious at their behavior and decided to punish them by opening the ground beneath their home that we know now as Marafa Hell’s Kitchen. To date, the locals believe that the milky white color that it displays and the blood red sandstone is a reminder against wastefulness and exorbitance.

Another tale is told that there was once a vibrant town located where Marafa depression stands. One day, the town dwellers received a vision instructing them to move out as a miracle was coming. Everyone moved except one old woman who refused to leave. The abandoned town vanished with the remaining woman in it leaving Marafa Depression in its place. But according to geologists, a ridge existed which was a mix of hard and soft rocks. Over the years, the crumbly, sandstone rocks have eroded under the forces of wind and rain, leaving the jagged outcrops of hard rock.

Marafa Hell’s Kitchen features an array of jagged gorges and tall chimneys, some of them rising up to 30 meters high and often Guided walks are offered at a fee. I mean who would not want to experience such an amazing and exciting adventure? Don’t be the only one left out